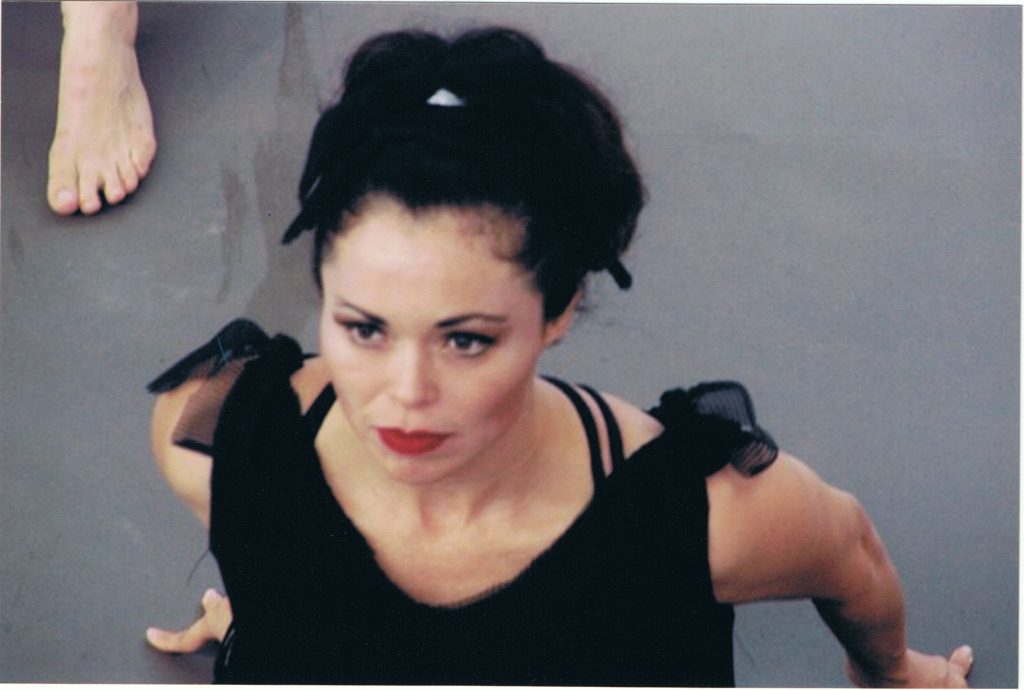 When a student recently asked me how it was that I began to work in aerial dance, my first thought wasn’t about the feeling of freedom, or the elegance which an aerial dancer can portray. Instead, my first memory of my aerial dance journey was the smell of four tigers in a circus ring.

At the beginning of 2003, I decided to create my first aerial dance choreography, “Water Beings” (“Seres de Agua”), as part of a larger production: H2O.  The choreography presented water as a mirror, a reflection of the imagination, from which everything arises. All existence comes from water. As human beings, this memory lives in perfect harmony with the permanent movement of our souls and minds. By sitting right in the middle of the action, on the performance space with the dancers above their heads, the audience would experience this fantastic world of water beings for themselves.

As a dancer and choreographer, I wanted to create work which plunged into the lives of these sea creatures, who swim forward yet at the same time are suspended, weightless. I was fascinated by this paradox of movement. Some impulse I could not define urged me to explore this idea in the air. I needed to ascend.

In my mind, dancing in the air should not be that difficult.  How wrong was I!

Although you might not think so, I am not completely fearless. I sensed that moving into the air might not be that simple, that I would need some special technique. What better place to learn basic aerial skills than a circus!

In order to pick up some tricks, I visited Los Hermanos Gasca, a Mexican circus that was in town. I spoke with a Chilean trapeze artist and asked him to teach me and my four dancers a few basic classes which would include trapeze and silks.

We worked for two months, six hours a day, five days a week. It was as difficult as hell.

Every day, we started with two hours strength training: pull ups for shoulders and upper chest, dumbbells for biceps and triceps, and hundreds of crunches for the abs. Then, it was time for a three hour session of learning aerial technique.

We would arrive at ten in morning. The tiger tamer in the ring in front of us was always repeating the same routine: cracking his whip to encourage the tigers to come down from their stands, and luring them back to their cages. Some tigers can be reluctant to go back inside, something I completely understand.  And so we had to wait.

While we were waiting, the smell of the tigers, mixed with sweat and dirt, absorbed deeply into our skin. This smell is something you can’t forget easily. It’s acrid, thick, and oddly comforting. It’s so intense that it pushes you to the floor, sucking you in, leaving you fighting against gravity. But the excitement of moving into the air was stronger.  Our minds needed to explore, and urged us to rise.

Learning how to ascend and descend, how to wrap and then drop, were among the many things we discovered. But technique was just part of the process. Now we had to transfer that information into its context, the story which I wanted to tell: that underneath the water, myriad forms of life float between the two realities of earth and air, in the same way that my country Panama floats between the Caribbean Sea and the Pacific Ocean. In each case, different creatures from two different worlds find ways to co-exist in harmony with each other.

Such a complicated idea…but only in words. In my language, the language of movement, which had for the first time taken to the air, my dancers and I found a new fluency.

Removing that tigerish smell from our bodies took about an hour, with serious scrubbing. But I didn’t regret it, then, or now. My new impulse to ascend just kept me floating in the right direction.

Join the discussion and tell us your opinion.

Wow. Your story is amazing!

NewSamEnt
– In reply to: Harvey Dale